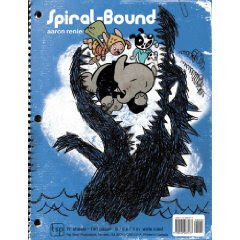 In the graphic novel world, this 2005 title is practically a golden oldie by now. It’s a terrific one, though, and well worth spotlighting.

In a small town populated entirely by anthropomorphized animals, a young and shy elephant named Turnip meets an outgoing young dog named Stucky, who urges him to join a sculpture camp where kids can make things out of clay, stone, wood, and metal. Meanwhile, a rabbit girl named Ana becomes a cub reporter for a top-secret underground (literally) newspaper, where her bird friend Emily is the photographer. In 178 densely illustrated pages, Turnip discovers his artist talent, Ana and Emily try to figure out the secret of a fabled monster in the town pond, the grown-ups of the town try to run the sculpture teacher out of town, and Ana gets eaten – or does she?

Renier must have spent a long time on this book. Each of the 178 pages has anywhere from 6 to 13 panels on it, each one featuring close-ups of the very expressive main characters or crowd scenes in the street or local hang-out featuring handfuls or dozens of townsfolk (fish in small water-filled spheres-on-wheels, giraffes with spiked collars, turtles wearing glasses, butterflies in bowler hats). Despite the fact that every character is an animal, the kids look like kids and the grown-ups look like grown-ups – this is achieved not by size and scale (because a young giraffe is pretty big, after all) but by details of dress, facial features, expressions, and body language. Turnip’s eyebrows are thin and often raised in a rather woeful and timid expression, while his dad has bushy eyebrows and the tusks of an adult elephant. Ana the rabbit is a particularly beguilingly drawn character, with her long ears spilling down her back under the bandanna she wears on her head, her scrunched-up leggings, and her exaggerated and very “tween” body language.

And the plots, which all revolve around the mythical monster in the pond? They are intriguing and loads of fun. I guessed the secret of the monster fairly quickly, but there was still a plot twist or two to catch me up short. Turnip’s slow and painful quest toward acknowledging his own creative gift is touching, as is his relationship with his loving but difficult father. In fact, even bit characters are given tiny but deft strokes of detail, enough to bring them to our attention and make the whole book shine all the brighter.

Renier hasn’t produced any more graphic novels that I know of since this one. Let’s hope he’s working on another one right this moment!
Posted by Eva M