Review of The Ruby Key by Holly Lisle 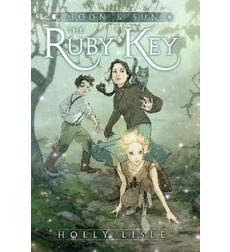 This fantasy starts off like many Human vs. Unhuman stories, with the humans making a yearly ritualistic offering to the nightlings in order to maintain an old truce that promises that nightlings won’t harm humans so long as humans give them goods and don’t trespass on nightling territory. Nightlings are a bit like elves – their faces are delicate and ethereal, their skin comes in colors like yellow and blue, their magic is of a higher order than that of humankind, and they can only venture out at night.

It is soon clear that all is not as it seems. 14-year-old Genna and her 12-year-old brother Dan set out at night into the woods to gather magical sap to help their dying mother (horribly risky as this is the time and the territory of nightlings) and are brought by a nightling girl named Yarri to the Kai-Lord, ruler of all the nightlings. He is a tyrant who has made a terrible bargain with the chieftain of Genna and Dan’s village – they, and in fact all humankind, might perish unless Genna and Dan can find and bring a nightling boy named Doyati back to the Kai-Lord.

From this point on, the action is non-stop. Genna and Dan’s journey is mind-bogglingly dangerous, with nasty creatures trying to eat them and various factions pursuing them. They can’t let their guard down for a second, and so the reader can’t either. Luckily, they have two companions – Yarri and a supercilious talking cat (who reminds me of Mogget in Garth Nix’s Sabriel) – who just barely keep them from getting killed over and over. Despite the tension, there is a lightness to the tone and even moments of levity. Several episodes have a very funny Lloyd Alexander-esque quality to them, as when Doyati tries to guess how Genna kills a huge dire-worm.
‘“Enchanted arrows? Spell of exploding flesh? Rain of fire?…Speak up, girl.”
“I hit him with your skillet. A lot.”’
In another scene, the travelers consult an old wise woman. After much mystical and vague proclamations, “she made a broad, sweeping gesture, certainly meant to be ominous or impressive, but in the cramped space, she managed to knock two jars of herbs from the shelves right beside her to the floor. We heard glass shatter, and then twin clouds of powder and dust billowed up from the floor.” Soon everyone is sneezing and the eery mood is quite broken, to everyone’s relief.

The finale is appropriately climactic and tense, with some surprises thrown in. Nothing is predictable, a refreshing thing in a fantasy, and there is still plenty of chaos left to ensure that the next book should be just as thrilling. I just hope we learn more about that mysterious cat.

One final note – this book is printed with dark blue ink rather than black, giving it a special look that is quite easy on the eyes.