Kid Power in the Library 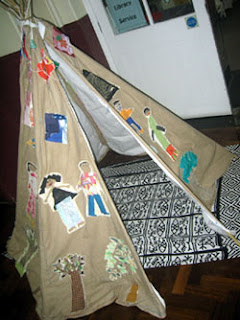 I just read Adrienne's excellent post on her library's Idea Box and was struck by what a good idea this is.

Many libraries solicit suggestions, usually by some kind of box at the circulation or reference desk. Often labeled "Suggestions," it is high up and out of kids' reach. And let's face it, it's grown-up suggestions that we're really asking for.

We Children's Librarians read books and eagerly put them into the hands of kids, spend lots of time planning and presenting every kind of program from story times to puppet shows to book clubs, and in general do our best to give kids the best library service possible. For the most part, we do a damn fine job.

But how often do we actually ask kids what they want? What books and DVDs would they like to see in the library? What is their favorite kind of furniture? What programs would most excite them? We tend to assume that because we are knowledgeable and have their best interests at heart, we know best what kids want and need.

Idea Boxes like Adrienne's, focus groups, and Children's Advisory Boards would all be great ways to really find out how kids envision the ultimate library. At a June 2008 ALA program called "Kids and Ever-Cool; Finding Them Together @ Your Library," Gene Del Vecchio, author of Creating Ever-Cool: A Marketer's Guide to a Kid's Heart, told us the kinds of things kids wanted to see in their libraries, including coke machines (maybe not), Dance Dance Revolution (actually a reality in some libraries), and cool furniture like teepees where they could crawl inside and read (now that we could do!). How did Del Vecchio find out? By asking focus groups to draw pictures of their dream libraries - what a fun idea for a library program, especially if we could put at least a few of those ideas into effect.

What do we get when we decide that it's kids, not necessarily us, who know best what kids want? We get libraries that are up-to-date, innovative, and decidedly outside the box, and we get buy-in from kids who have actually taken part in shaping their own libraries. How can we lose?
Posted by Eva M