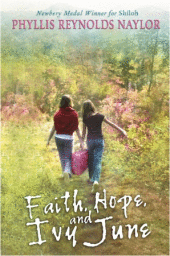 This tale of two 7th-grade Kentucky girls is a bit like the tale of the city mouse and the country mouse. The country mouse, Ivy June, comes from one of the poorest parts of Kentucky, mountainous Thunder Creek. The city mouse, Catherine, lives in a big home in Lexington. In an exchange program, Ivy June stays for two weeks at Catherine’s house and then Catherine stays with Ivy June for two weeks.

The idea is not just to see how the other half lives but to puncture stereotypes (on both sides) and to gain new appreciation and knowledge about other ways of life. This does happen – both Ivy June and Catherine are at first taken aback but then learn to see all the important things beneath the surface differences. Despite a few misunderstandings, they even become friends.

Both girls are kind, thoughtful and intelligent, making them fine ambassadors for their respective regions and ensuring that the reader doesn’t have to endure any contrived culture shock crisis. There are some uncomfortable moments for both girls, but they weather them with maturity. Things go relatively smoothly and yet the experiences and thoughts of the two girls (expressed in journal entries that each girl is required to write) are compelling and extremely believable. This being mostly Ivy June’s story, readers really get to know this practical and thoughtful girl and to feel completely comfortable in her world – outhouses, no phones, and all. Catherine’s lifestyle, although probably bearing more resemblance to that of many readers, begins to feel like the exotic one.

It’s almost unnecessary, then, that drama is injected into the story in the form of two disasters, one happening in Catherine’s family and the other in Ivy June’s. It won’t be a spoiler to reveal that Ivy June’s beloved grandfather gets trapped in a mine, as readers will have been expecting it since the beginning of the novel – but I won’t give away the ending. The tension does draw the girls closer together and allows Catherine in particular to gain insight into the close-knit fabric of Ivy June’s community – but this would have been a fine friendship story even without the nail-biting climax (which did bring me to tears – and that’s not giving anything away, I promise!).

This is a thoughtful and well-written exploration of family, friendship and one’s place in the world. For grades 4 to 7.
Posted by Eva M