Review of Heroes of the Valley by Jonathan Stroud 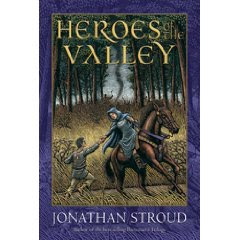 Heroes of the Valley by Jonathan Stroud. Disney/Hyperion, 2009.

Halli Sveinson, aged 14, is the second son in one of the 12 main houses in the Valley. Somewhat squat – his short legs are a running joke – and swarthy, he is a trickster and a trouble-maker from birth. Brought up on tales of the Heroes, including his own ancestor Svein, who rid the Valley of the man-eating Trows untold years ago, he chafes at his boring, placid, rural life.

When an annual Gathering of representatives from all the Houses is held at the House of Svein, previous bad blood between Halli’s reprobate uncle Brodir and the leaders of the House of Hakon leads to Brodir’s murder at the hands of one of the Hakonssons. Halli, who witnesses the murder, is horrified when he realizes that all his family will do to get revenge is demand land of the Hakons through the Valley justice system. His blood is hot with the need for more visceral and bloody justice, and so he leaves his remote part of the Valley for the first time and journeys all the way to the House of Hakon to mete out his own punishment.

It’s a darn good thing that one other significant thing happened at the Gathering – Halli met a girl about his own age named Aud, only daughter of the head of the House of Arne. Her caustic manner of speaking is balanced by her common sense, curiosity, and basic decency. As Halli is himself a decent sort of guy despite his tendency to act without thinking, they get along instantly – and Aud saves Halli from disaster any number of times. Her presence during the final battle scene (a scene that manages to be both unspeakably grisly and ridiculously funny) prevents Halli from suffering a most gruesome death and removes a huge threat from the Valley once and for all.

Being a big Bartimaeus fan myself, I tore eagerly into Heroes of the Valley. Although it began rather slowly, the more I read, the more I appreciated the slow build-up of tension, character development, and humor. Something about the tongue-in-cheek dryness of the wit is reminiscent of Terry Pratchett, although sometimes it veers into Monty Python territory with wonderful results, especially when the characters of Snorri, a crusty old beet farmer, and Katla, Halli’s old and dismissive nurse, make an appearance.

Halli, the hero of our tale, is not so clear-cut a character. At first he seems like a truly annoying trouble-maker, and in fact he does have a tendency until the end to act impulsively and sometimes idiotically. However, he is rarely mean-spirited, even when being bratty and obnoxious, and he shows true and believable growth throughout the book. When Halli displays real leadership qualities at the end, it makes complete sense, unbelievable as it would have been at the beginning.

Stroud’s Bartimaeus Trilogy was wildly popular with 11 and 12 year olds, particularly boys. Maybe it was the sassy, pompous, over-confident, yet ultimately thoughtful djinni, maybe it was the crazed footnotes, maybe it was the thrilling magic and intriguing setting, or most likely it was a combination of all three. At any rate, it was a trilogy that was right at home in both the children’s and YA sections. This book, lacking the over-the-top goofiness of the Bartimaeus books, skews a bit older and perhaps won’t have their wide appeal. But maybe I’m wrong. Just in case, hand it to as many kids and teens as possible. Some won't take to it - but the lucky ones who do have a real treat in store.
Posted by Eva M