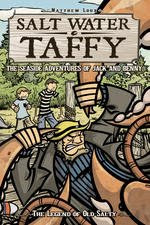 This is one of the more appealing and original graphic novels I’ve read in a while. Two brothers, 11-year-old Jack and 8-year-old Benny, are very reluctantly spending a summer with their parents in Chowder Bay, Maine, a picturesque little seaside town. Two things make their television-less sojourn bearable – their introduction to salt-water taffy and a fisherman named Angus O’Neil. Then the taffy store is robbed. Could the perpetrators have anything to do with Angus’ tales of a giant lobster named Old Salty?

Outrageously, they do. Lobsters (big and small), a mysterious figure who always seems to be around at just the right time, and some really odd seagulls all play their parts in this deliciously different story. Jack and Benny find a terrific friend in Angus, who, although strong, brave, and imposing, totally lacks the usual grown-up characteristics of self-consciousness and skepticism – he’s a great guy to have along on an adventure.

The black-and-white artwork is presented in rectangular panels of varying size. Lines vary in width, with bold ones predominating, giving the art a bold and energetic look. The characters don’t have a wide array of facial expressions, but their body language and the exaggerated angle of their mouths always get the point across.

The unpredictability and goofiness of the story and the energy of the art make this a great choice for most young readers, including reluctant readers.
Posted by Eva M