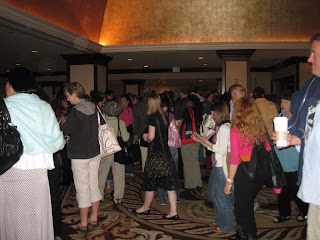 What are all these people lining up for? Is a big author signing books? Has Neil Gaiman been sighted in the lobby of the Century Plaza hotel? No, these folks are just trying to get up the very narrow escalator from the Grand Ballroom level. It took me a good 7 minutes yesterday.

Now it's Sunday, and I'm stretched out on the floor outside the Ballroom while hotel staff frantically convert it from audience-style seating to (as Lin called it this morning) the Chicken Room, i.e. our banquet hall. I'm not having chicken breast - we shall see what the vegetarian option will be. From previous experience, I'm predicting either pasta or grilled veggies or both. As long as there's a chocolate dessert, I'll be happy.

Lucky Dan Yaccarino to be such a fabulous, crowd-pleasing illustrator that he could have just showed us his presentation of artwork, commercials, and short films without saying a single word - and we would have been agog with admiration. But lucky us - Dan's verbal presentation was funny, self-deprecating, and perfectly illustrative of his message to us - keep saying YES to the opportunities that come your way (or that you create for yourself), even if they are scary and new. Here's something I didn't know about Dan - he created artwork and even short animated commercials for Gardenburger in the late 90's. Hey, maybe that's what they'll serve me for lunch today.

Ooooh - then came Holly Black. I don't want to say too much about her talk, which was called "Examining the Strange: The Basics of Fantasy Writing," because I want to devote an entire post in it in the near future. Let's just say that her points about the importance of using language to embue fantasy with a sense of the "numinous" were well-stated and thought-provoking. Fun fact about Holly - she grew up in an old Victorian house with a mom who encouraged her sense of the mysterious in life. Not only did Holly's mom tell her stories about the ghost in the attic with whom she used to dance as a child, but she also warned Holly never to astral project - after all, while your soul was off having adventures, something could crawl into your empty body and take up residence. Now that is good motherly advice!

Next up - the Golden Kite Awards Luncheon, an afternoon workshop (can't yet decide between Marla Frazee and Dinah Stevenson/David Wiesner), and Elizabeth Law on the changing nature of children's publishing.
Posted by Eva M