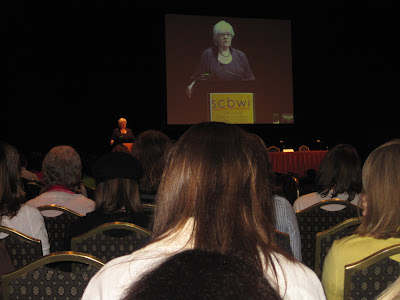 My colleagues and I always share a registration to the annual summertime SCBWI conference, which is conveniently held in Los Angeles - and this year I lucked out and get to attend both Saturday and Sunday! I've only been here a morning and already my blood is sizzling with inspiration and joy.

Arthur Levine moderated a panel of picture book authors and/or illustrators on the topic of "creating an extraordinary picture book." Arthur asked each panelist about a particular acclaimed, award-winning picture book that he or she had written, wondering if they thought this work was "extraordinary" and if so, why.

Eve Bunting talked about Smoky Night - after graciously explaining that she felt it won the Caldecott for David Diaz's amazing illustrations, she went on to say that this book came out of the strong feelings she experienced during and after the LA riots. As a resident of LA, she could smell the smoke and hear the commotion - and she wondered what the children were feeling amid all the hatred and violence and chaos. Eve feels that she was able to express these thoughts and feelings in a way that makes Smoky Night an important and enduring book.

Kadir Nelson talked about Moses. He felt a strong personal connection to Harriet Tubman, who reminded him of his apparently formidable grandmother, and this gave the story its heart and its strength. "As if you felt her hand on your shoulder while you were working on it," Arthur suggested. "Well...I wouldn't put it exactly like that," answered Kadir wryly.

Melinda Long discussed her fun How I Became a Pirate. As a child, she buried her mom's earrings in the backyard and marked the spot with an X, and as an adult she had fun writing about piratical adventures. She was quite firm in her statement that she doesn't feel funny books are at a disadvantage when it comes to being called "extraordinary" - and since I love funny picture books best, I applaud her certainty.

Two interesting tidbits from Kadir - he and his editors and designers were looking for a distinctive period look for We Are the Ship, which they felt they would achieve if the cover looked like a combination of an old Coca-Cola and a Hershey's bar. Cozy, attractive, and nostalgic..."spiffy," as one of his editors put it.
Also, Kadir told us that Michael Jordan's mom asked him to make a change in the artwork for Salt in His Shoes - because she didn't allow such things in her home, she asked that the Bruce Lee poster Kadir had depicted in Michael Jordan's room be changed to Roberto Clemente. Whether it was or not, I don't know (I'm writing this on the floor outside the Ballroom during the lunch break...).

And then Karen Cushman gave one of the those talks that makes you want to run home, rev up the old computer, and write a novel. As someone who always wants to add "once and future writer" after librarian on her nametag, I found this to be heady stuff indeed. Now, I wasn't sure what to expect, because once when Karen Cushman had won an award (the California Beatty Award, I think), she stood up, basically said "thank you," and then sat down. Does she not give speeches, I wondered?

She does, and how! I can't possible recap all the funny warm highlights of Karen's talk, but I will tell you that after she told us "don't listen to advice" about writing, she gave us these words - which she credited to someone whose name I didn't catch, darn it. The words of advice are these:
Show Up; Pay Attention; Tell the Truth; Let Go of the Outcome.
Good stuff, and equally applicable to parenthood, one's career, and any number of other important endeavors.

A couple of fun bits from Karen's speech - her daughter, who is a librarian in Oregon, dreams of opening a store that would sell books, chickens, and yarn. "Seriously," Karen says. And apparently her first drafts are "concise to a fault," a mere 50 or 60 pages that her editor Dinah Stevenson calls a "bouillon cube" of a book.

About that photo at the top - that's my pathetic view of Karen Cushman, as seen on the big screen. Notice all the heads in front of me. I seem to have surrounded myself with women in my life - as a children's librarian, I work with women and go to conferences (ALA, SCBWI, etc) where a good 80% of the attendees are women. What if I were a mathematician? How odd it would be to see all that short hair in front of me, all those masculine necks.

After lunch - Ellen Hopkins and more!
Posted by Eva M