This has been the SCBWI conference of f-bombs. Not only did Sherman Alexie apparently let off one on Friday, but Karen Cushman quoted him Saturday morning (after referring to an author who writes self-described "shitty first drafts," Karen said she was allowed to say that after Sherman said "F**k you" on Friday), Ellen Hopkins told us how she called her husband a f**cker (goodness!) after he challenged her to get serious about writing, and then one of the agents at the panel yesterday used the f-word as well. What IS the sweet and cozy world of youth literature coming to?

Now that I've gotten over my palpitations, I'll briefly recap the sessions I attended Saturday afternoon. Ellen Hopkins talked about her own slow and rocky climb to the top of "the Mountain" as she called that goal of becoming a successful writer. I haven't read Crank or any of her other books, but now that I've heard about their parallels to her own interesting life, they're on my must-read list.

A panel of 6 agents, ranging from the extremely gung ho and cocky to slightly more self-effacing, told us about their agencies, their submission policies, and how they see the state of the publishing business. The impression I got is that the bad economy has been rather good to agents - because very few publishers now accept unsolicited manuscripts from unknown schmoes like you and me, writers are forced to sign with an agent in order to have even the chance of an editor glancing at their work. So... writers are selling less work directly to publishers, but agents are selling more.

My favorite session of the aft 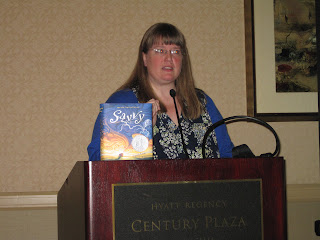 ernoon was the talk given by Ingrid Law, the wonderfully down-to-earth and warm author of Savvy. It was called "Major Villains Need Not Apply; Writing Fantasy Without an Archenemy," and I have to say it got the long-dormant creative part of my brain all abuzz with possibilities. Ingrid asked her small but intensely interested audience to think about the conflicts and problems in our lives - the things that keep us up at night. Then she asked us if they involve any sinister archvillains (bosses and ex-husbands don't count, she said), and of course most of us were struggling with more everyday, if still serious, problems involving work, family, the environment, and so on. After talking a bit about metaphor and inner vs. outer conflicts, Ingrid had us do a wonderful exercise that involved different ways of re-writing the 3 Little Pigs, coming up with a conflict that didn't involve the Big Bad Wolf. What fun! Within 30 seconds I had written "1. Pigs in competition with each other to build best house. 2. Storm, instead of wolf, blows houses down. 3. Mama pig gets empty nest syndrome, visits all the pigs incessantly, and drives them crazy. 4. Pigs get homesick; want to go home. And folks shared many much better ideas, involving the housing authority and more.

Fantasy is what I love reading most of all, but my (extremely unpublished) manuscripts are middle-grade and YA realistic fiction - I just couldn't imagine being able to write fantasy that would be as good as the fantasy books I adore. But Ingrid Law managed, in the space of less than an hour, to cause an entire shift of perspective in my rusty writer's mind.

As I biked home, I kept wondering if perhaps it might be time to start writing again...
Posted by Eva M