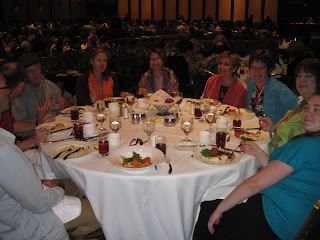 This is what is great about SCBWI (and by the way, I realized belatedly that nowhere in any of my reports did I state what this stands for, assuming that everyone must know. In case anyone doesn't, it's the Society of Children's Book Writers and Illustrators) - when the big double doors were opened to the Grand Ballroom for our luncheon, I dashed in and sat down at the first table I came to. A bunch of other folks soon came to join me, all strangers to me - and it so happens that among them were Greg Trine (author of the Melvin Beederman books), Tina Nichols Coury (who, besides being an author and blogger, produced the book trailer for Susan Patron's Lucky Breaks), and Alexis O'Neill (author of The Recess Queen, Loud Emily, and more). The less well-known folks were all authors, illustrators, or both (including a mom and daughter who both write YA fiction) - and when they heard I was a children's librarian, they pronounced me the most important person at the table. How often do we hear that?? I beamed.

By the way, my predictions for the vegetarian entree (pasta or grilled veggies) were both wrong - it was chopped and sauteed veggies wrapped in puff pastry, which would perhaps have stayed flaky if it were not soggy with tomato sauce. Oh well, the rolls were excellent. 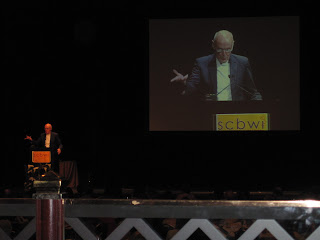 So - the Sid Fleischman and Golden Kite Awardswere presented and the speeches were quite stellar (not that I will recap them here - this is the once-over-lightly report), and then Richard Peck gave a mini-keynote speech. I must admit that he terrifies me ever so slightly. Such precise pronunciation! Such scathing opinions! Such formidable talent! His speech was about soldiering on despite one's Despair (at the horrible state of the world, pretty much) and was inspiring and daunting at the same time.

I attended Marla Frazee's workshop session on "How Your Words Inspire Me to Draw Picture - and How They Don't" - not because I have ever aspired to write (or illustrate) picture books but because I'm a big Frazee Fan Girl. My kids and I spent hours reading Hoberman'sThe Seven Silly Eaters - sure 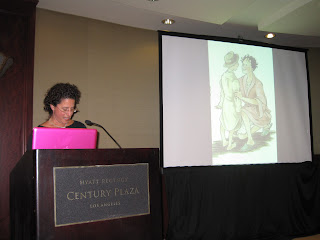 , the bouncy weirdness of the story is fantastic, but it is Frazee's depiction of this wonderful, eccentric family in their hand-built house by a lake that we found (and find) so compelling. And all her other books are just as great and in fact keep getting better. She said that to her, pictures "amplify emotion" like a movie soundtrack does, while in chapter books (like Clementine by Sara Pennypacker), drawings punctuate the text. I was happy to hear that for Clementine, Frazee was inspired by Louis Darling's illustrations for the Ramona books. She showed plenty of slides, including some illustrations for her upcmoing All the World by Liz Garton Scanlon.

Then back to the Ballroom, transformed back into audience-style seating, where editor Elizabeth Law, now heading Egmont Publishing, told a howlingly good and spicy story about her misconduct while hanging out in Verla Kay's chatroom late one lonely Saturday night - and then told the audience to keep writing the good stuff, because the good stuff WILL find a home.

On that hopeful note, I rolled homeward on my trusty, rusty steed, feeling very lucky indeed to be steeped in the world of children's literature. It's a good place to be.
Posted by Eva M