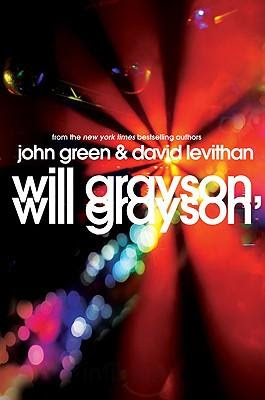 Green, John and David Levithan. Will Grayson, Will Grayson. Dutton, 2010.
John Green specializes in a certain kind of character - the ordinary sort of teenage guy who wears ordinary, nondescript clothes (think jeans, low-tops, and a t-shirt), and doesn't belong to any particular group or clique. What happens? This guy always falls hard for a beautiful, exuberant, unique, witty, outrageous girl with Issues.
David Levithan, as those who have read his books know, is fond of quirky repartee and plenty of excursions to dive-y little nightclubs to see obscure indie bands that no one else has heard of. His teens may seem too cool to live, sometimes (even when they're supposed to be weird or uncool), but they're always people you wish you knew (or you wish you were).
This book is about two Will Graysons; they are two different people, both teen boys who live in Illinois and narrate their stories in alternate chapters. One is the typical John Green Every Dude, but he's a little more closed-down than usual. He keeps his head down, avoids getting entangled in relationships, and is rather aggressively pathetic. This Will's best friend is Tiny, an enormous gay teen with the personality and flamboyance to match his size, who is writing a school musical called Tiny Dancer (fabulous name!).
The other Will is a very troubled teen who is gay but can barely admit it to himself, much less any one else, including his friend-by-default Maura. His big joy and secret is Isaac, a teen he met on the Internet and with whom he has been chatting - and falling in love - for months. Finally, they decide to meet in Chicago. Does this turn out well? Of course not. This Will's segments are all written in lower case, signaling his low self-esteem.
However, one thing that does come of this excursion to Chicago is that the two Wills meet each other, and the gay Will meets Tiny. This relationship becomes a small but crucial part of Tiny Dancer. Meanwhile, straight Will is so reluctant come out of his cozy little shell that the musically snobby but otherwise quite wonderful Jane has to practically beat him around the head and shoulders to get him to commit to the slightest kind of relationship with her.
Both Wills can be aggravating, self-pitying, dense, and downright foolish. But they are basically good people whose instincts for kindness have to be coaxed out by the people around them. This book is all about the necessity of taking risks, even though it means you will very likely get hurt. Over and over, even. But if you don't take risks, the really good stuff will never happen to you - and finally both Wills really get it.
It's Tiny who really shows them - his musical is all about love (well, really it's all about Tiny, but it's about love, too). The lyrics to his songs are so good, I would pay good money to see this musical on Broadway.
What's second base for a gay man?
Is it tuning in Tokyo?
I can't see how that would feel good
But maybe that's how it should go?
This novel is excruciatingly painful and hysterically funny by turns, sometimes on the same page. It's also more "real" than some of Green's and Levithan's other books - these kids really could exist. Well, except for Tiny, who seems WAY too awesome, talented, and out-and-out fabulous to be possible. But I wish he was my friend!
I LOVE this book - and my 15-year-old daughter (who usually reads only fantasy) loves it, too. So there you go. Grades 8 and up.
Posted by Eva M