Review of Incarceron by Catherine Fisher 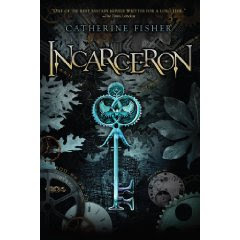 Living in a world made of metal, where there is no sunlight and not enough food, where ignorance, illness, and violence are the norm - these things would be bad enough if its citizens didn't realize that this was a prison from which there is no escape, and they were born its inmates.

One inmate, Finn, is quite certain he wasn't born in Incarceron but rather Outside. His proof for this is tenuous, consisting of a mysterious tattoo and no memory of his origins beyond some dreamlike images of places that couldn't exist in the prison. Finn is determined to escape, accompanied by an odd assortment of companions.

Meanwhile, Claudia lives on the Outside in a society that, though extremely technologically advanced, is forced to mimic a pre-technological era, perhaps the early 19th century. Claudia has been brought up in luxury, groomed by her father - the Warden of Incarceron - to marry a prince and rule the realm. Claudia struggles against the limits placed upon her, and she learns of Finn's existence while spying on her father's secrets.

The horror of Incarceron lies not only in the miserable, trapped existence lived by its inmates but also in the fact that the prison is alive. Over the 150 years of its existence, the complex systems that were created to keep the prison functioning have achieved a consciousness that is not so much cruel as amoral and uncaring. It has a keen, bemused, but detached interest in all the thousands or even millions of prisoners and watches them through its thousands of electronic eyes - and arbitrarily creates havoc simply to keep its own boredom at bay. Like the prisoners, the consciousness of Incarceron is trapped within its own walls.

Like The Hunger Games, this is a fast-paced and enthralling read, full of danger, intrigue, and truly fascinating characters and settings. The premise is incredibly enticing and the secret of Incarceron's location and nature is truly horrifying. The stultifying and dangerous metallic world of the prison and the gilded, sunlit, but false society Outside are equally compelling. I didn't want this book to end, but luckily there will be at least one sequel - though how I'll bear the wait until it's published, I can't imagine.

Highly recommended for grades 6 to 12.
Posted by Eva M