Review of Keeper by Kathi Appelt 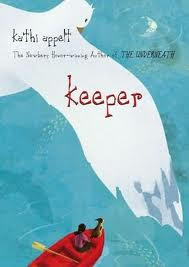 The beginning of this book finds 10-year-old Keeper and her dog BD on a very small boat in the middle of the night, scolding 10 crabs and waiting for the tide to rise so that she can free the boat from the pier it's tied to. Why is she on the boat? Why is everyone so mad at her? And what on earth do those crabs have to do with anything?

From that moment in time, the story begins swooping and spiraling, sometimes back in time a little to that morning before everything got ruined, sometimes way back to when Keeper was a little girl, or even farther back to when Keeper's ancient neighbor Mr. Beauchamp was a teenager in France, before catching up to Keeper again and taking her out to sea on that little boat. This indirect, circling-back narration is much like the flight of a crooked-winged seagull named Captain, who can't fly straight at something but must curve around to it.

The cast of characters is small, and each one of them has his or her unique history and part to play. White-haired, even-keeled Signe is Keeper's astonishingly young guardian, Dogie is the young proprietor of a local surf shop housed in an old bus, Meggie Marie is Keeper's long-absent biological mother (and possibly a mermaid), and Mr. Beauchamp is an old man who has never quite stopped hoping to be reunited with his long-lost love. And then then are the non-human characters, who (as anyone who has read The Underneath knows) are just as important as the human ones - the dogs BD and Too, the mysterious one-eyed cat Sinbad, the even more mysterious Jacques du Mer, and my own favorite, Captain the seagull.

Though the backgrounds of these characters couldn't be more different, the 10 years they have spent all living in the same sparsely populated region of the Texas coast has woven their fates together in some strange and unpredictable ways - and when Keeper frees some crabs that were meant for a very important gumbo, she sets off a string of events that ends with a most satisfying Happy Ever After for all involved.

The narrative style varies a bit from character to character and chapter to chapter, sometimes employing those short, choppy, emphatic sentences that were so effective in The Underneath, sometimes filling up paragraphs with dense evocative prose. A few of the 120 chapters are so short that they serve as little poems, as in Chapter 91:

The narration gives Captain, strangely enough, quite a vast and baroque vocabulary for a bird who thinks about food with 90% of his brain and about his friend BD with the other 10%, and whose only spoken word is "c'mon!" Not only does Captain (or the narrator, rather - but still, it's clear that this is what is going through Captain's head) twice quote the poem Jabberwocky by exclaiming "calloo callay!" but his love for watermelon inspires this passage: "...his favorite, his most beloved, his all-time highest exalted sublime most delicious stultifyingly extremely wonderful marvelous fantastic yes yes yes: watermelon!"

Sometimes this kind of self-conscious language breaks the mood or splashes a bit of cold water in the reader's face. That "calloo callaying" seems downright silly to me, given that it's a seagull who is saying it - a seagull brimming with brio and personality, it is true, but not one that has read Lewis Carroll. And some other stylistic decisions seem mannered, as when Keeper (or the narrator on her behalf) spells out words periodically for emphasis, something that happens in the first few chapters and then is dropped for some reason. Or maybe it continues and I just didn't notice because by then I was fully immersed in the story.

That's the thing about Keeper. All that circling and swooping, all those characters with their small contributions that end up making one intense story - these serve as threads that draw the reader further and further in. By the satisfying and happy ending, I was fully committed, heart and soul, and so of course needed to blow my nose and wipe my eyes. The emotions of Keeper and Signe, and of Mr. Beauchamp, are so masterfully drawn that I defy you to stay unmoved.

And August Hall's artwork is a lovely complement to this tale that is anchored in reality but has some supernatural elements swimming in the depths. The jacket art, with Captain's wing providing white space for the author and title, is particularly compelling, but I am also fond of the drawing of a fierce Signe holding young Keeper - all the love that Signe feels for Keeper is there.

So - despite finding some of the narrative quirks not wholly successful, I'm recommending this highly for ages 9 - 12.
Posted by Eva M