Read with Janet and Mark 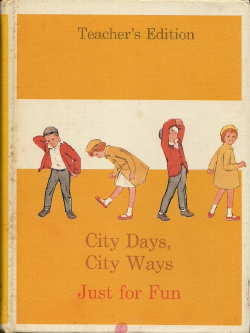 LA Times columnist and blogger Carolyn Kellogg has a series called School Reading, in which she asks authors about books they read as students.

In today's column, Mary Cappello (author of Awkward and the upcoming Swallow: Foreign Bodies, Their Ingestion, Inspiration, and the Curious Doctor Who Extracted Them) waxes intense about a book from the Dick and Jane series, which holds an enduring fascination for her because this was the first book she ever read.

"The book's red ball, my red ball, was like Helen Keller's water pump and well," she says. Every little bit of this book was entrancing to her, including "a lock of hair (a ringlet or flip) and the pie crust ripple of an ankle sock...I also have a vivid memory of hyphens...The hyphens were just as mesmerizing to me as the letters."

In 1969, California schools adopted the Janet and Mark series by Mabel O'Donnell, and that series, rather than Dick and Jane, is what I remember reading in 1st grade circa 1971. I remember very few specifics about the series, except for an episode in which Mark loses his library book or something of that sort; this resonated, as my mother was a librarian. Otherwise, I remember being both puzzled and attracted by the exotic suburban setting and tone of the books. I didn't know any children who resembled the neatly clad, rosy-cheeked Janet and Mark, and their mom and dad were even more alien. Their mom wore GLOVES!! My mom wore a hand-crocheted bikini. The streets of Janet and Mark's town were mostly empty except for a few smiling passersby. The streets of my town were festooned with graffiti and thronged with hippies, winos, skateboarders, Holocaust survivors, poets, and flocks of somewhat grimy children.

Apparently my brain was being warped by sexist, racist rhetoric even while I marveled at Janet and Mark's smooth and clean lives. It's a good thing I was busily sucking up all manner of diverse reading material at home, or I might have grown up to wear aprons and gloves.

Mary Capello sounds so intelligent and eccentric in Kellogg's interview that I will certainly read Awkward and Swallow. Best of all is her last paragraph, when she is asked what book she would assign first graders.

"If I were teaching a similar class today, I'd bring students into a room filled with books and let them find the one that called to them. Their choice would be equivalent to their own mysterious relationship to the world."

Lovely! I do believe Capello might be a librarian at heart, and certainly she must be a true book addict.
Posted by Eva M