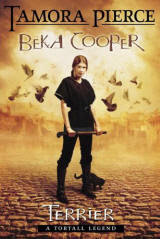 In one of those strange moments of reading synchronicity, I'm reading Joseph Wambaugh's Hollywood Crows at home - and I'm listening to Tamora Pierce's Terrier during my commute to work. And though they seem dissimilar on the surface - one being a modern, slightly satirical tale about LAPD cops and the other being a YA fantasy - they have both allowed me to immerse myself in the culture of cops.

Cop talk, cop loyalty, cop cynicism, cop idealism, cop violence. Sure, in Terrier the cops are called Guards, or in slang "dogs," and they have to cope with magic as well as with garden-variety rogues and thieves. Still, they bear a startling resemblance in outlook and behavior to those Hollywood boys (and girls - another similarity is that women play strong roles as cops in both books) in blue.