Review of The Runaway Dolls by Ann M. Martin 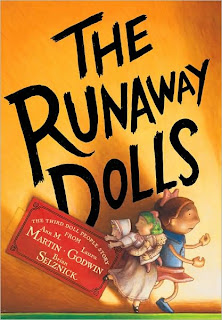 When I was a child, I was quite certain that all my dolls and stuffed animals possessed a Rich Inner Life, and even now when I go up to the attic to haul down holiday trappings, I could swear that my daughters’ old Barbies, baby dolls, and stuffed animals are sending me reproachful vibes from their plastic storage bins.

Perhaps this is why I’ve always been drawn to books about dolls, and not just any doll books, oh no. In my favorite books, the dolls walk, talk, and in general lead much more interesting lives than you or me (well, than me, anyway).

The Runaway Dolls by Ann M. Martin and Laura Godwin and illustrated by Brian Selznick (Hyperion 2008) is the third in the Doll People series. Before they even read a word, savvy fans of the first two books will be able to guess from a short series of illustrations that a long-lost character may be about to make an appearance – and sure enough, that package we see being addressed, then lost behind some furniture, then finally mailed 100 years later contains Annabelle Doll’s baby sister (well, actually she’s “free” as she says with her lisp, and fully able to walk and talk). The package has arrived just as the human inhabitants have left on vacation and has not been opened; because it isn’t addressed to them but rather to the person who lived in the house 100 years ago, Annabelle is terrified that the package might be sent back unopened. She and her best friend Tiffany Funcraft carefully open the package, let out Matilda May (“Tilly”) and then, in a panic, run away.

They hitch a ride on a red wagon pulled by some human boys and end up in the woods with their doll brothers Bobby and Bailey. Together, they make their way to a department store’s toy section, and then (after some travails) back home again, where all ends up just fine (except for “consequences” for Annabelle and Tiffany on account of running away).

Tilly is the ultimate little sister, half adorable and half annoying, with plenty of questions about the world. Although her knowledge of the world is limited, she, like the other four doll kids, contributes to the efforts to get back home again against fairly huge odds. The story is eventful, with a pleasant balance of fast-paced action and character-driven interaction. Most kids will probably find the scenes in the toy section of the department store very intriguing, if rather reminiscent of Toy Story 2. All sorts of dolls play all night long (including dozens of identical Tiffanys and Baileys, which Annabelle finds downright creepy) – Selznick’s illustrations of these characters are spot-on.

As in the first two books, Selznick’s life-like drawings are integral to the book – they not only illustrate but enhance the story and help to move the plot forward. Much of the humor derives from the illustrations, as well, with the text expressing more twinkle than guffaw. I only had one problem with the illustrations – they make clear the main flaw of this book, which is that there is no way five little dolls could either successfully manage the physical things they attempt (such as climbing all the way up a red wagon, even if they did use the wheels – Tiffany maybe, but not Annabelle) or remain unseen (such as when they all dash across crowded sidewalks to the department store). I had to suspend loads of disbelief – which is luckily something I do both frequently and with great facility (I believed Bill Clinton when he said he didn’t have an affair with “that woman” – yes, I am that naïve).

Quibbles aside, this is a worthy successor to the first two Doll People books and will be enjoyed by grades 2 to 5.

And here is my list of all-time favorite novels about dolls and toys!

Miss Hickory by Carolyn and Sherwin Bailey
The Little Wooden Doll by Margery Williams Bianco
The Miraculous Journey of Edward Tulane by Kate DiCamillo
Hitty: Her First One Hundred Years by Rachel Field
The Doll’s House by Rumer Godden
A Mouse and His Child by Russell Hoban
Toys Go Out by Emily Jenkins (and the sequel Toy Dance Party)
The Doll People by Ann M. Martin and Laura Godwin (and the sequel The Meanest Doll in the World)
Winnie-the-Pooh by A.A. Milne