Review of Greetings from Nowhere by Barbara O'Connor 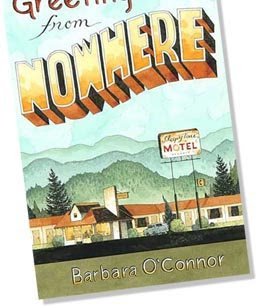 Sometimes a book comes along that hits you in just the right way. It doesn’t klonk you over the head with its fabulousness, but rather it quietly sinks into your mind and heart as you read it, creating a mood that lingers.

Greeting from Nowhere by Barbara O’Connor (Farrar, Straus & Giroux, 2008) is such a book. O’Connor’s previous book Fame and Glory in Freedom, Georgia was a highly pleasant read, but I must confess that I didn’t finish How to Steal a Dog – the conjunction of my mood and the style of the first 20 pages was not auspicious. Perhaps I’ll give it another try.

It isn’t often that a children’s book opens with the thoughts and actions of an adult character. Aggie and her husband Harold have run the Sleepytime Motel in North Carolina for decades, but now Harold is dead and Aggie is old and the Sleepytime Motel is run-down. Aggie decides to sell the place and move in with her sister.

Willow’s father, at loose ends after Willow’s mother leaves them, decides to buy the motel sight unseen, and he drags an unwilling and despondent Willow to the Great Smoky Mountains to make the transaction.

Meanwhile, Kirby’s fed-up and high-strung mom is driving him to what amounts to a reform school in a last-ditch effort to get him to behave. Her hair-trigger temper and apparent lack of affection for Kirby make it clear why Kirby is not exactly a delight of a boy. They are not far from the motel when their junker dies along the side of the road, and so they get a room until money arrives to fix the car.

Finally, Loretta receives a mysterious package that contains small keepsakes from her long-lost birth mother, who has just died. One of the treasures is a charm bracelet with charms from various parts of the U.S., including the Great Smoky Mountains. Her parents suggest that they visit these places, one at a time, and so they head off. When night falls, they find themselves at the Sleepytime Motel.

As the families arrive, one by one, Aggie’s second thoughts about selling her motel become stronger. This place has been her whole life! But she knows she can’t keep it going any longer. She fills out the paperwork reluctantly to sell the motel to Willow’s dad, and tries to keep her mind off leaving by getting to know the three kids who are staying at the motel.

The interactions between Aggie and the children, between the children and their parents, and among the children themselves are the heart of this tale. Kirby is antisocial and feels deeply trapped by the negative way the people around him (in particular his mom) feel about him, Willow has been uprooted from everything she knows and is desperate for any word from her mother, and Loretta – well, Loretta is such a ray of sunshine, with such amazingly sweet and supportive parents, that nothing much is ever going to keep her down.

These three kids behave toward each other as children do toward kids they don’t know – with varying degrees of wariness, friendliness, or shyness, depending on the child and the situation. Aggie likes kids, all kids, and doesn’t hesitate to bring pull them into her orbit, by gentle force when necessary. Without Aggie, they all might have stayed apart, but Aggie is a wonderfully cozy and nonjudgmental hub. They talk, play, and eventually all pitch in together to make the motel ready for a tour group. Not much goes on, but all the conversations and thoughts we overhear are right on target.

The three families are only at the motel a few days before two of them move on, but quite a bit goes on underneath the uneventful surface of their visit. Aggie’s agitation about her own impending move strikes a chord with Willow, who knows what it’s like to leave what you love; doing something to help Aggie brings a lot of healing to Willow herself. Kirby gets to experience the restful and satisfying feeling of being around people who like and value him rather than fear and resent him, something that may make his stay at the boarding school a bit more successful than it would have been otherwise. And Loretta - well, Loretta and her parents already knew how lucky they are.

So – a quiet tale, a humble setting. Nothing earthshaking happens. The characters are regular folks. Somehow, though, thanks to some wonderfully understated writing and a keen knowledge of how people think and talk, it all comes together in a satisfying package.