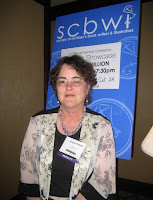 My colleagues in the Children's Services office split one ticket to the Society of Children's Book Writers and Illustrators annual conference between the three of us, and I got to attend on Monday.
The highlight was most definitely Susan Patron's speech, the dessert of the conference and appropriately called "Endings: Surprising and Yet Inevitable." She riffed on the idea of euphemisms being soft lies, using as one example the term "pre-published" as being a polite but rather patronizing way of saying unpublished (as Susan said, "It's like calling me pre-thin"). Children more than anyone else need clear-eyed truth, not soft lies, in order to understand and come to terms with the world.
Susan also spoke of what seems to be an innate yearning for connection; it's a subtext in many books and a main theme in The Higher Power of Lucky. Great endings in books bring readers to the conclusion that is the best and truest, and thus helps them to make those satisfying connections (dopamine burst, anyone?). Susan finds it very cool that a novel, which is essentially the fabrication of an elaborate lie, actually leads readers to a greater understanding of the truth.
We lucky audience members were treated to the first paragraph of Lucky Breaks, to be published in March 2009, as well as a truly funny and moving summation of the meaning of the SCBWI annual conference that had us laughing and tearful at the same time. Major standing ovation for Susan Patron, who speaks for us all - but much more eloquently.
Connie C. Epstein gave her usual concise report on the state of the children's publishing market - picture books are slightly down, but the categories of middle-grade, teen, early readers, and graphic novels are holding steady or growing. But we knew that...
Four incredibly smart and gorgeous young editors - Gretchen Hirsch from HarperCollins, Amalia Ellison from Abrams, Namrata Tripathi from Hyperion/Jump at the Sun, and Nancy Conescu from Little Brown - were the panelists at a program called "Emerging Editorial Voices."
One question was "would you rather receive a manuscript that had a great voice but little plot, or a great plot with little voice?" Interestingly, the panel was evenly split, with Gretchen and Amalia saying that there was plenty of "voice" out there but few page-turners, and Namrata and Nancy maintaining that you can often fix plot but if the voice isn't there, you can't magic it into existence.
All four editors are clearly dedicated and professional - if they are any indication, the future of children's book editing is in good hands.
Speaking of plot, Bruce Coville had plenty of tips on what he feels makes a great story:
1. Ha!
2. Wah!
3. Yikes!
In other words, some laughter, some tears, and some surprises.
Bruce suggested that writers "take a character you like and get him in trouble" and then figure out what a character doesn't want and throw that at him. Above all, make sure the character needs to make moral choices - not necessarily between good and bad, but maybe between the lesser of two evils.
There's a new kid in town, namely Egmont USA, headed by Elizabeth Law, formerly of Viking and Simon & Schuster. Their first list will appear in Fall 2009 with about 11 to 15 titles, and when they are completely up and running, they hope to publish about 50 titles a year, mostly middle-grade and teen, but also some picture books. Look for new books by Todd Strasser, Walter Dean Myers (in collaboration with Christopher Myers), Mary Amato, and Janet Lee Carey, to name a few. 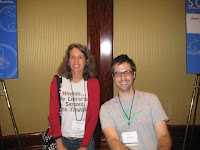 Finally, I waited in such a long line to get The True Meaning of Smekday (my current fave SF novel for kids) signed by Adam Rex that I missed the dessert buffet. Dang! Worth it, though. If you can drag your eyes away from Adam's adorableness, please note my Curmudgeonly Librarian t-shirt.
Posted by Eva M