N.D. Wilson - and 5 of his biggest inspirations! 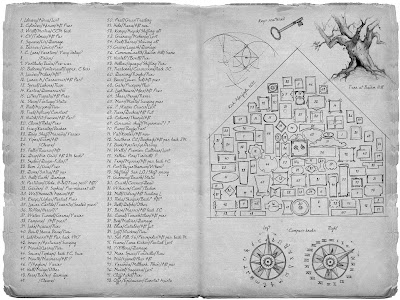 I'm proud to host Day 4 of N.D. Wilson's blog tour to celebrate the publication of The Chestnut King (my review)! Many thanks to Random House for giving me this opportunity - and for giving all of us a peek not only into Mr. Wilson's writing life but into one of the never-before-explored cupboards. And thanks especially to N.D. Wilson.

The 100 Cupboards series is brimming with a particularly large, talented, far-flung yet close-knit family. It's no surprise, then, that N.D. Wilson has a large family of his own. Here is what he has to say about them:

I have five kids. Yes. Five. The oldest is seven. The youngest is fresh and pink, barely more than one month old. At this very moment (even though I now have my own office—a recent development), she is sleeping at my feet. Two others have snuck in here as well and have begun stealing printer paper. (And now they’re drawing in the corner). One is downstairs working on Math homework. Another is downstairs arranging an epic conflict between cars and knights on the coffee table.When it comes to writing for children, I cheat. I am surrounded by a small assortment of children at all times. My eyes are attached to theirs as they discover the world, as they swarm the front window to watch the squirrel wars, or to the back window to watch the evil neighbor cat hunt sparrows. Thunder and lightning—always potent, no matter your age—are even more so when they make sleeping in the attic impossible, and wide eyes and giggles and screams and quick dives beneath blankets are the order of the night. (Those are the best nights for stories: school in the morning or not, we have to spin tales together to the booming soundtrack of rumbling thunder and the quick lash of lightning on the ridgeline visible from the attic windows.)

And I don’t just cheat by stealing perspective from my kids. I steal their words, too, their very thoughts.

Like many writers, I have notebooks full of lines and ideas and characters and openings. But mine aren’t only full of thoughts original to me. Stolen bread is sweet, as Solomon would say.

Yesterday, while playing a solemn game of pirates with a three year-old, I discovered his inability to say Jolly Roger (combined with a constant need to try). To him, it is the Dodgy Roger. Those words are now preserved at my desk, waiting for use. Is Dodgy Roger a character? A particularly questionable child at school? A dodge-ball legend? Is it a game? (Fancy a game of Dodgy Roger? I like.) Is it the name of a particular childhood con? It’s something—I know that much—it’s wonderful, and I never would have thunk it up myself.

Of course, I steal from my younger self as well. Leepike Ridge was inspired by a Styrofoam floating adventure of my own (shared with a friend). 100 Cupboards pulled from my own stint living in my grandparents’ attic. But Dandelion Fire was (in part) provoked by watching my oldest son, then much younger, harvest vast quantities of fuzzy seed heads, carry them to the fence, and blow them into the neighbor’s garden, where I am sure they were appreciated. He triggered much pondering and meditation on the subject of dandelions (I even wrote a poem about it), and was the primary reason why I began to think of them as a force for good and not for evil.

My daughters are different creatures, with different eyes, desires, and inspirations, different fears and different angers. I love them, I try to swallow them with love, and they are still forever foreign. I have stood in my sons’ shoes. I have been in their heads and made their choices. But these girls, these daughters, these little sisters of mine, they do more than show me a new way to see characters, they change me, my self, the narrator of all that I write. When a man has a daughter, doors are thrown open, his life is remodeled, there is a new wing in his emotional and psychological house. “Here,” a smiling two year-old with pigtails says. “Here,” says the sleeping newborn in pink. “Feel this. Are your bones shaking? Do you ache with inadequacy, with a new terrified, aggressive, protective love? Has your heart slopped out your shoes?”

I write books about kids. I put them in terrible positions. I take away their parents and challenge them to rise, to conquer, to overcome. So much of the innocence of childhood fades. A book cannot end without growth, without characters walking through shadows and back into the light, one step closer to becoming adults. And after exploring worlds of children in trouble, of children lost, of father’s removed, I need to be recharged. When I finish my day, hammering on glossy, worn keys in my attic loft, there is nothing more beautiful than descending down into a world of laughter and jokes and shouted tales of playground woe. As the table is set, napkins and forks and glasses all arranged according to some mysterious protocol of childhood, and my wife, my lovely, the mother of my children smiles, I flop onto the floor.The cry goes up. The hounds bay. Mere moments pass, and I am buried in a tangle of legs and arms, a giggling, groaning pile of noses and fingers. And futures.

And now for something completely different - a glimpse at Richard's later explorations of one of those mysterious cupboards! This proves that Richard is nothing if not intrepid...

Anastasia, last night, dining with your family, I expected you to notice the changes in me. Perhaps you can’t easily recognize the traces left by adventure, but it didn’t even seem as you were trying. Your cousins were just as blind.

There is a scrape four inches long on my right ankle. In all the madness of my journeys, I can’t even name the cause—perhaps a bone as I raced through the labyrinth. My ear is still red and slightly swollen from being pinched by the terrible man in the first cupboard. And, as I banged my face inside that same cupboard on my return, there is a small bruise on my right cheek (I’m sure it’s noticeable).

If you had taken the time to look, your opinion of me would have changed. Would you have felt sympathy? Admiration? Maybe. When lunging out of the labyrinth, I rug-burned my wrists on your grandfather’s carpet. Unhealed, they sting and stick to the paper as I write.

This morning, as I returned to this carcass of a farmhouse, I am even more committed to adventure, to danger. Perhaps, when we see each other again, there will be a gouge halving my eyebrow. Or maybe I will lose an eye entirely. If my half-blindness and a velvet eye patch is what is required to get you to see Richard Hutchins for what he is, so be it.

Disappointment. I will admit it. I have sworn not to lie to you. I was expecting treasure in this new cupboard. Ghosts of crusaders the journal said (though I haven’t any idea what a crusader is).

I got stuck. The cupboard connected to a hidden panel in a ceiling. As soon as I began to make my way through, I felt something pull me forward. But it wasn’t pulling me forward, it was pulling me down, and it wasn’t something, it was gravity (as your world calls it).

My head and shoulders and arms swung suddenly out of a ceiling, dangling awkwardly six or seven feet above the floor in an empty room. I just managed to spread my legs in time (still horizontal in the farmhouse cupboard), and I barely caught myself.

I couldn’t worm back in (my arms wouldn’t fit—the sides were too tight), and my head began to feel as if it would explode with blood. And my hands turned purple. Hours, yes, hours I dangled there, and I won’t tell you that I didn’t cry. Tears dotted the dusty floor beneath me.

To make matters worse, one small window let in the clattering sounds of danger. Men were shouting, horns were blowing, drums were beating. I could hear steel on steel, and horses screaming in rage and death and injury. The sounds rose and fell all day. They traveled. I was a misplaced and entirely vulnerable gargoyle, just waiting for someone with a sharp object to do me in.

You might think that I should have let myself fall the rest of the way through. But think of it, Anastasia, how could I have returned through a door in the ceiling? There were no chairs and no tables to boost me back up. Should I have run outside, into a massacre, and asked someone for a ladder? I made the wise choice. I dangled, and I waited.

I think I was asleep, or simply dazed, when the door opened. The scream is what roused me, and then the chattering of an angry old woman with rings in her wrinkled and pore-pocked nose. She beat me with a broom, Anastasia, like I was that brightly colored hollow donkey full of candied sugars at your last birthday celebration.

At the first, I covered my head with my arms and writhed and begged her to stop. But the blows stung, and the stinging woke my courage. I caught the broom (though it raked my knuckles), and I tore it from her. The tide had turned and I struck! Yelling like Fat Frank in one of his fits, I smacked that old woman in the ear, and she rushed back out the door.

Well, now I had a broom didn’t I? That was something. I looked around. The ceiling had beams (I had tried to reach them before). The broom handle was just long enough to slide above two of them. A brace! Something to push against! I slid upward, backward, just far enough to catch myself when the handle snapped.

I must hurry back to Hylfing now. Someone must have missed me, but my legs are still tortured with the prickles—the departing needles of numbness—and so I will rest on the floor and choose tomorrow’s cupboard (see, I am not deterred). Here is your great-grandfather’s description, and your grandfather’s odd addition at the end:

#63. Collected 1905. Small vertical rectangle. Six-pointed star keyhole. Petrified maple? Alder? First report: Egyptian merchant told the story of a small stone-wood box that sank his ship. First purchased from an Indian astrologer who claimed to see a younger sun through its keyhole. When opened, the box revealed an elevated perspective of a harbor. The box was lost at sea when huge quantities of shattered stone emptied from its mouth, rupturing the hull of the merchant’s small vessel, and sinking the craft entirely. Acquired at great expense. Retained merchant as guide and hired ten local sponge divers for twenty-six days before success.

Goodnight, sweet A. I hobble back toward the world we share.

Be sure to check out yesterday's amazing post at The Reading Zone and check in tomorrow with Fireside Musings for the last installment.