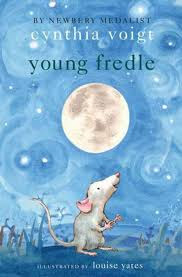 Voight, Cynthia. Young Fredle. Illustrated by Louise Yates. Knopf, 2011.
Fredle is a young house mouse who resides with his family and other members of his tribe in the kitchen of a farmhouse, where life, while beset with dangers such as a cat and traps, is pretty good. When Fredle gets ill after eating a strange and delicious food (chocolate, as it turns out) and is cast out by his family (because no one can support a sick mouse that can't forage for itself), he is certain he will die. No mouse who has ever been cast out has ever come back.
Instead, he is tossed outside by the human lady of the house. There, Fredle meets new animals (outside mice; a friendly dog; gregarious but dangerous raccoons), sees stars and flowers for the first time, and learns to question, to listen, and to live boldly. When he does finally make it back inside to his family, he finds that he has changed too much to accept the old ways.

Although the jacket art and sweet drawings make this look like a book for young readers, the 240 page length make it clear that this is for the same kind of readers who devour Avi's Tales of Dimwood Forest books (Poppy et al) or Kate Dicamillo's The Tale of Despereaux. The exotic hazards of being a tiny creature in a large world also bring to mind Mary Norton's The Borrowers, and Fredle's adventures and the fascinating, eccentric creatures he meets remind me a bit of Russell Hoban's A Mouse and His Child. Fredle learns quite a bit from everyone he meets, from the brave, quarrelsome, hungry raccoons with their hooting laughter to sweet and loyal dog Sadie, and he realizes that life is full of wonders and should not be avoided or denied through timidity or fear. (we shy readers need to be reminded of that every once in a while, as well)

Though not every character is memorable, Fredle certainly stands out as a mouse of stature and worth - kids will enjoy getting to know him. Recommended for ages 9 to 12.
Posted by Eva M