What I've been doing instead of blogging 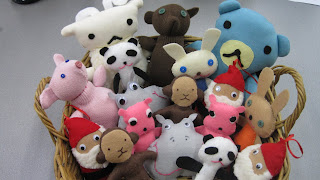 I've fallen behind on writing posts lately, but that's only because I've been keeping busy with:
Work! Yep, that's 40 hours (plus 7.5 hours commuting time) per week, not leaving much time left over for blogging. And those breaks, so handy for dashing off a quickie blog post, are usually used for getting more caffeine into my system these days.
Cybils! Oh, I am SO behind in my reading - so I feel lashed by guilt every time I sit down with my little netbook instead of a nominated middle-grade fantasy or SF book. I'm not sure this is much of an excuse, however. My co-panelist Charlotte has not only managed to read most of the nominated books, but she has been posting up a storm, including a weekly round-up of fantasy and SF reviews from all over the blogosphere.
Running! The 2010 LA Marathon is looming...
Crafting! The only thing that keeps me from melting into a little puddle of guilt while watching Netflix movies (when I should be reading!!!) is working on my creatures (photo above). It's for a good cause - I'm donating them to my library system's Nettie Frishman fundraiser, which raises money for children's librarians' staff development workshops. But will anyone buy them? Fear of rejection clutches at my heart, as well as the guilty hope that I'll be able to take my creatures all home again where they belong.
It's so convenient that even my excuses for not posting can become fodder for a post...
Posted by Eva M