Review of The Grimm Legacy by Polly Shulman 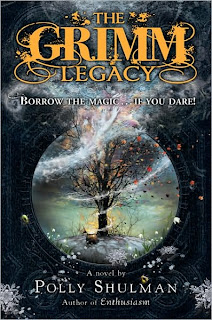 Elizabeth's mother read Grimm fairy tales to her when she was a young child, and Elizabeth's life has become something of a Grimmsian tale itself, what with her mother dying, her father remarrying, a new task-master stepmother, and two selfish older stepsisters. She is ripe, therefore, for the wonders of The New-York Circulating Material Repository, where she is hired as a page, and in particular its magical Grimm Collection.

The concept of a library that lends out objects - historical, rare, valuable, or simply interesting - is exotic enough, but to lend out magical objects seems to beg a whole host of problems. Sure enough, Elizabeth and her teen-aged fellow pages are soon embroiled in a dangerous search for the entities who are stealing powerful magical objects from the Grimm Collection.

Being an ordinary Muggle-type schmo with no magical ability whatsoever, I find fantasies about magic that can be worked by anyone, regardless of innate magical talent, to be rather alluring. While a wand from Ollivander's would open no doors for me, no matter how many times I shouted "Alohomora," the stick from the Grimm tale "The Raven" would open any door I (or anyone else) hit with it, no questions asked.

Which raises plenty of questions about how easy it would be for this kind of magic to become common-place. Knowledge has a way of spreading, so if a piece of yarn, knotted and muttered over in a certain way, protected someone from magical harm, wouldn't every teen suddenly know how to do this, the way they all seem to know how to make a friendship bracelet? And if there really were magical objects that could be used by anyone, they'd all be in the hands of rich and powerful folks. Which is of course the point of the Repository - to protect these objects while still allowing their use - but I can't help but think that this protection is mighty slim, particularly taking into account the folks who know about the Grimm Collection and all the other mind-boggling special collections at the Repository.

That is all rather beside the point, however. This tale is a imminently readable blend of a contemporary urban fantasy (and with no faeries, vampires, or werewolves!) and a timeless Austen-esque romance in which the girl won't admit to herself that the guy who has been irritating the heck out of her is really the man of her dreams - or at least fine boyfriend material. There is danger and intrigue, and if Elizabeth's family members remain absolutely one-dimensional and stereotypical, that just proves how really fairy tale-like they are. This is a charming fantasy - AND it has librarians and pneumatic tubes, making it awesome indeed.

Recommended for ages 13 and up.
Posted by Eva M